Our sister city in Ireland

Twinning of Ireland’s and Canada’s Belcarras

As many Belcarra (Canada) residents are already aware, our village has a namesake in Ireland. William Norman Bole, a successful criminal lawyer (and later a judge) in New Westminster was an immigrant from that country in the 19th century. As payment for his defense of the Irishman John Hall, Belcarra’s first white settler, Mr. Bole acquired land in what would ultimately become our village.

It was this William Bole, born in Castlebar, County Mayo, Ireland, who first referred to his holdings as ‘Belcarra’. His choice appealed to many and was to be adopted officially over a century later by local residents for British Columbia’s newest municipality. At that time it was assumed the name had been composed by William Bole, expressing the phrase “beautiful land upon which the sun shines” in his native Gaelic. Indeed, a plaque was once featured on a fountain at our ocean front park with precisely this explanation.

Our Village may well be a ‘beautiful land upon which the sun (periodically) shines’ but it appears this was not the origin of the name ‘Belcarra’. A few years ago we learned, through the visit of a priest from Ireland, that there is actually a second Belcarra. It turns out that that small community is in County Mayo and as close to Bole’s home town of Castlebar as we are to Port Moody.

After establishing contact with several residents in the Irish Belcarra, a series of very informative exchanges occurred. One spokesperson was Mary Prendergast (Chair of Belcarra’s Community Council) and the other was Sean Nestor (a retired teacher interested in and knowledgeable about local history). As our family was planning to visit the UK and Ireland this spring, the possibility of a formal association of our two Belcarras was proposed. This was well received on both sides of the Atlantic. Thus on Friday, June 22nd, 2007, 125 years after Bole named his newly acquired property, a very successful and colourful “twinning event” occurred in Belcarra, County Mayo, Ireland.

Mary Prendergast had worked what, no doubt, is her standard organizational magic and we began our twinning with a parade down main street. Seventy residents joined in with large Irish and Canadian flags for the honour guard and smaller ones for those along the roadside. The procession, led by a sole piper, proceeded from Corley’s Bar to the Town Hall. 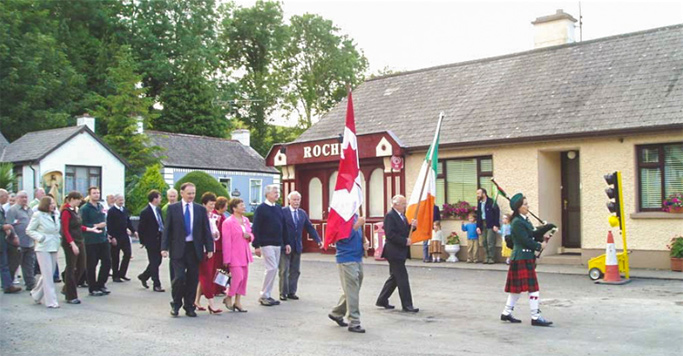 Prior to launching the parade, we were able to talk with many of the citizens. Mary had even convinced some tourists (renters of caravans, i.e. horse-drawn vans) into joining the evening’s festivities. One family of four from Michigan wondered why the Canadian flag was being displayed in Ireland and loved the explanation. The parade concluded at a community hall similar in size to our own. There a local photographer promptly staged, in advance, all the exchanges that were to take place during the ceremony. He was double tasked, having also to cover an event that evening at the local church.

Sean Nestor then provided some interesting local history about the Bole family, adding an Irish twist not previously known to us. Apparently the Boles were not local, having been sponsored as a reliable (read Protestant) addition to Castlebar by a local influential English family. The father of William Bole was, in fact, the first editor of a pro-establishment, pro-landowner, and pro-English newspaper in Castlebar. These connections probably paved the way for William Bole to be trained as a lawyer and to be called to the bar in Canada. Talent no doubt mattered in English colonies in the 19th century, but patronage and the proper religious disposition would be equally important. We are (blessedly) indifferent to that today. Many of us in Belcarra could not even reliably name our neighbours’ and/or friends’ religious affiliations, if any. Such was not Bole’s world. As the representative of our community, I was presented with a striking Belcarra Ireland crest painted on a cloth scroll by a local artist. This gift is now featured in our hall.

Interestingly the Irish Belcarra’s crest prominently displays a crow (they have many of them). In accepting the gift I noted that when our own citizens had selected “Belcarra” as the name for our Village, one (humorous) alternative had been “Crowville” as we also have more than our share of this species.

In turn, I presented a copy of our Coat-of-Arms to Mary Prendergast, describing each of its component parts including the shamrock that reflects our Irish connection. The accompanying text is in both English and, thanks to Sean Nestor, Gaelic. This bilingual feature was clearly appreciated. The Cathaoirleach [pronounced, ka-here-loch, is the title of the speaker of the sixty-member Irish upper house, Seanad Éireann, pronounced sch-anad air-inn] of Mayo County Council, Mr. Gerry Coyle, was then called upon to formalize the twinning. His position in our context would approximate that of a provincial cabinet minister. Though tired from a recent trip to New York, he proved an able speaker.

Following his presentation I read our own Village resolution, a framed document signed by Council, staff and a number of our residents. Mary Prendergast promised it would find a place of honour on the community centre’s wall. Finally our two communities exchanged gifts: ours was an engraved loving cup, theirs, an Irish crystal hurricane lamp. Official activities now completed, all retired for an evening of Irish music and Guiness at Flukies Pub. That evening there was enthusiastic talk about travelling to the West Coast of Canada to visit our Belcarra. Only time will tell how soon we are able to return their kind and generous hospitality. 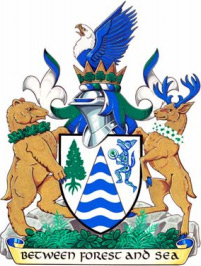